Last week I witnessed firsthand what is considered by many as the current bane of Caribbean beaches – sargassum seaweed fighting for space with copious quantities of plastic. We were on our way to Morant Point lighthouse, Jamaica’s easternmost point, when we stopped at Holland Bay Beach. The state of it stopped us in our tracks.

The most obvious and disturbing element was the expanse of plastic waste that blanketed the beach from the road to the sea. The only thing that prevented the plastic from entering the water was the barrier of brown algae, known as Sargassum. Although both are an assault on the senses, the fact that one is natural and the other is man-made reflects the different potential solutions to these issues.

According to the Caribbean Environment Programme (CEP) “pollution from solid waste, and in particular from plastics, has emerged as one of the greatest global challenges”. The CEP adds that “everyday 8,000,000 new solid waste items that become marine litter in our oceans and seas everyday”.

This was evident at Holland Bay, where – at this easternmost point of Jamaica – it was clear that not all of the plastic on the beach originated in Jamaica. This is line with the CEP, who state that in major Caribbean cities “the amount of solid waste collected can be as low as 50% of the total amount generated”. The remainder ends up not just staying in the territory of origin, but it is also carried by the sea to other countries, such as Holland Bay swimming beach in eastern Jamaica.

So what can we do about it? The fact is, we know what to do. Just to remind readers, according to the Caribbean Environment Programme, actions include, ” improve the collection, transport and disposal of solid waste; restrict the importation and use of single-use plastics; promote recycling and re-use; identify more environmentally friendly alternatives to packaging material such as styrofoam, and develop new job opportunities relating to solid waste and plastics management”. However, even if all of actions immediately occurred, the fact is that plastic has a lifespan of 400 years. Yes, life is a beach – especially for plastic.

Over the past few years, Sargassum has been viewed as an unsightly nuisance, especially if you were looking forward to a pleasurable swim in the crystal clear water of the Caribbean sea. According to Daphne Ewing-Chow, “since 2011, a sargassum seaweed crisis has devastated the Caribbean: tainting beaches, killing marine life and limiting the livelihoods of fisher folk due to an increase in fuel and maintenance costs, impeded efficiency and reduced catch”. 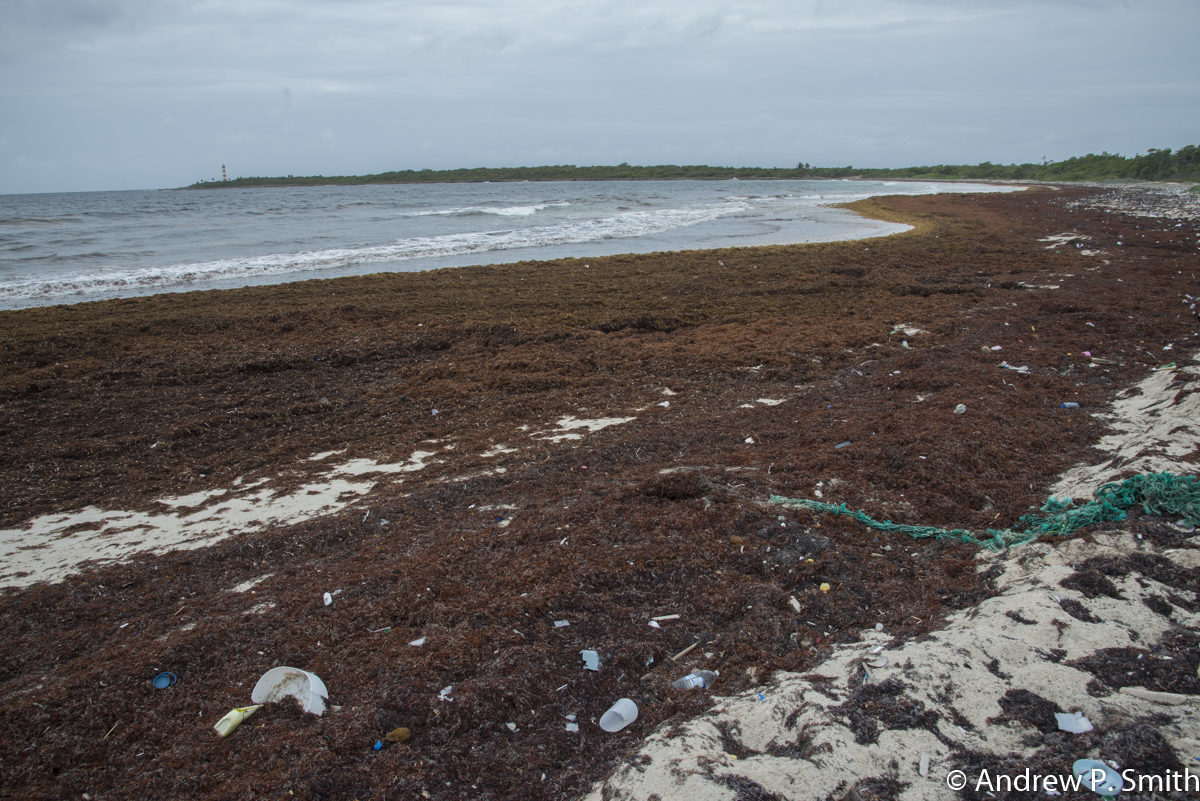 According to the Caribbean Hotel and Tourism Association (CHTA), “the excess of Sargassum washing up on beaches in the Caribbean originates from the Sargasso Sea, located in the open North Atlantic Ocean near Bermuda. This sea stretches 1000 km wide and 3200 km long and is estimated to hold up to 10 million metric tons of Sargassum”. The CHTA suggests that the increased spreading of Sargassum on Caribbean beaches “has been linked to increased nitrogen loading due to pollution of the oceans through human activity of increased sewerage, oils, fertilizers and global climate change.”

However, it is not all gloom and doom. In fact this brown algae has already proved to be a source of income for a resourceful entrepreneur in the eastern Caribbean island of St. Lucia. According to Ewing-Chow, Sargassum is the raw material for the organic fertilizer company Algas Organics. In addition, according to a Sargassum resource guide published by the CHTA, Sargassum can be used as a landfill to combat beach erosion and can also be used for composting.

For the more adventurous among us, the CHTA also suggests that it be utilized gastronomically. They recommend that “before preparing it as a dish it must be tested and thoroughly rinsed. Some Sargassums can be cooked in lemon juice or coconut milk and served alone or as a side to meat and fish. However, the most popular way to serve it is to fry it quickly and then let it simmer in water with soy sauce and other ingredients between thirty minutes and two hours depending on your preference and the dish”. Lion fish with a side of Sargassum anyone?

So although many Caribbean beaches are currently beset by the twin scourge of Sargassum and plastics, at least one can be utilized beneficially. The other one….that will take more work and a change in mindset and attitude.