A week in Bonn. I was fortunate to experience this a few weeks ago thanks to UNESCO-UNEVOC who invited me to attend a panel discussion on TVET skills and heritage preservation that coincided with the meeting of the UNESCO World Heritage Committee in July. During this week I was able to balance work with some sightseeing, photography and I admit, eating like a tourist.

Let me explain. I believe that when travelling to a foreign country, you should experience the culture, and one of the best ways to do so is to eat like a native, not as a tourist. Unfortunately I was unable to do so due to my limited (non-existent) grasp of the language. I admit the reason for this is solely my own. In spite of valiant attempts by a colleague to teach me usable German so that I could at least help myself in basic communication and experience the local cuisine, I failed miserably. 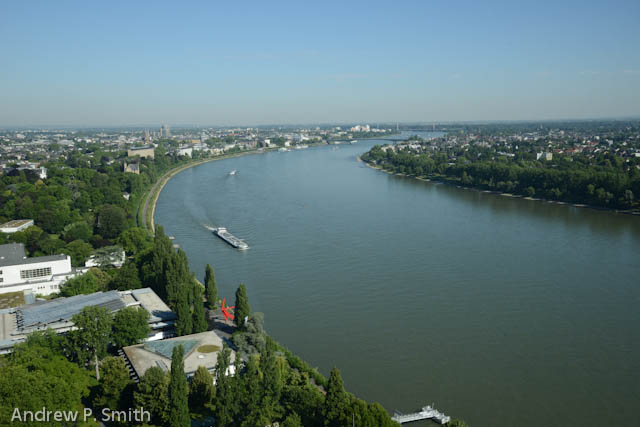 A view of the Rhine River from the UN Campus

On the evening that I arrived, my search for dinner ended up at “Pizza Boy”. Yes the menu was in German, but I saw a name was quite familiar: “Hawaiian”. I pointed, nodded my head to the query of “beer?” and that was my first meal in Germany.  For the next two days, I repeated this pattern with minor variations. On day two I substituted “Hawaiian” with “Boston” and on day three I was adventurous, and ordered a pizza without at English name. I have no idea what it was but it had the number “4” in it, which I assume referred to the number of different meats on the pizza. I also substituted the beer with apple juice.  In my defence Pizza Boy was one of the few eateries that wasn’t chock full of smokers. I admit that I will eat moderately unhealthily at times, but I draw the line at second-hand smoke. After all, my body is a temple. One that is in need of more maintenance as the years go by, but still….. 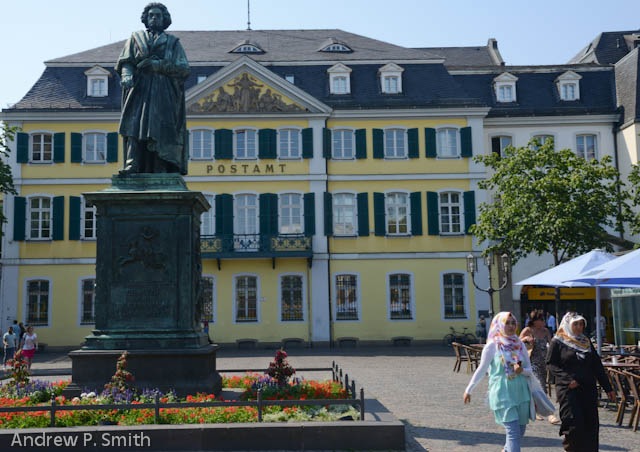 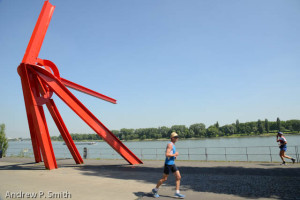 Running along the Rhine

After three days of work, pizza, beer and the hotel’s standard breakfast buffet of sausages, toast, eggs and bacon, I was able to do some sightseeing, walking through the Bonn city centre. The centre reflects the history, culture and pride of the former capital of West Germany. Home of Beethoven, his imposing statue glowers from pride of place in front of the Postamt building. The centre itself is deceptively large due to how compact the streets and buildings are arranged. Just when I thought I had seen everywhere, I made a turn into an unknown location that required exploration. This ended up being an intriguing mix of upscale shops and historical monuments and buildings, many of which were undergoing repairs.

One such structure was the Basilica of St. Cassius & Florentius, which dates to the 13th century. I spent some time walking around it, trying to get a suitable angle that didn’t involve restoration work and was not satisfied with my results. Then I noticed something…people were exiting the church. Needless to say, I entered. Immediately I was enveloped by the quiet and cool, dim light of the interior, which possesses Romanesque, Gothic and Baroque elements. This juxtaposed with the heat of the European summer as well as the bustle of the city centre.

After spending a few minutes to relax and offering up a prayer I made my way back out. An evening meal was becoming a priority and I decided to try something different. I found a restaurant and  ordered and ordered ..not pizza but pasta – without the beer! Okay, I will admit…it was a Pizza Hut restaurant. 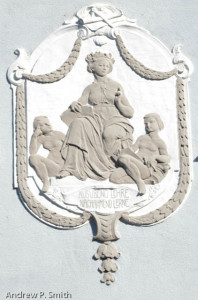 Details from a wall on the streets of Bonn 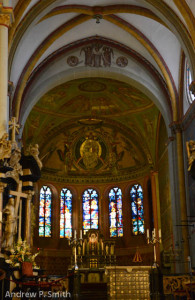 The High Altar of the Basilica, completed in 1865

So after an eventful week in Bonn I now need to restart my running regime and get back in shape. My desire is not fueled by all of the bicyclists that rode past me on the streets, nor by the fit looking runners that strode past me in the heat of the day.  It is none of these reasons. The reason why I have been inspired to return to fitness after a week in Germany is really very simple. Eating badly in Bonn.